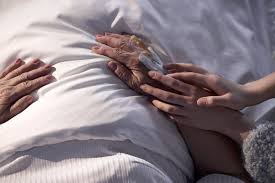 There are certain signs when illness or old age has tipped into a preparation for death.

The dying may feel compelled to resolve unfinished business – End-of-life research studies show that the dying are often called by an almost organic process to confront and resolve unfinished issues from their past, particularly with estranged family members.

Special requests – Sometimes people may want to do something special such as visit a particular site, or be surrounded by their favourite flowers, or to hear certain music, or to have family photographs near, or to make contact again with someone who has been important in their lives.

Their external world begins to diminish – The draw of the world at large no longer appeals and even engaging with family matters no longer seems important. Rather the dying person prefers to remain in a safe, quiet place, often in bed.

Physical changes – These changes are part of the dying process. The skin can become paper-thin and pale, with dark liver spots appearing on hands, feet and face. Hair can also thin and the person may shrink in stature. Teeth can discolour or develop dark stains.

Increased sleep – The person begins to sleep for long periods. This can be distressing for relatives to witness, but it’s important to understand that physical exertion for someone approaching death is exhausting, and, for the moment, all their effort is being put into staying alive. Nearer the end, they may be incapable of remaining alert and increasingly drift in and out of consciousness.

Appetite reduces – the body knows it no longer needs fuel to keep it going, and those who are dying often lose their desire to eat or drink. They can begin to lose weight, sometimes quite rapidly. It’s important not to force food or drink onto someone who no longer wants it. But do take guidance from medical staff and end of life carers.

Change of language – The person may start to talk about ‘leaving’, ‘flying’, ‘going home’, ‘being taken home’, ‘being collected’, ‘going on holiday’ or using other journeying language. They may also begin to express heart-felt gratitude to their carers and to their family as a preparation of farewell.

Deathbed visions – it is not uncommon in the weeks, days or even hours and moments before death for a dying person to speak of being ‘visited’ by dead relatives, friends, groups of children, religious figures or even favourite pets.

A little more about deathbed visions

The dying will say these ‘apparitions’ have come to ‘collect’ them or help them let go. Even when semi-conscious, it may appear that they are reaching out to take hold of something, and then feeling it between their fingers as if puzzled. They may also appear to be thinking deeply, as if they are being ‘shown’ information that they may not have considered before.

The dying, and those who witness these end-of-life experiences, usually describe them with loving reassuring words such as ‘calming,’ ‘soothing,’  ‘greeting,’  ‘comforting,’ ‘beautiful,’ ‘readying.’ It is not known how many dying people have such visions and experiences. But end-of-life experience research does suggest that they happen in all cultures and religions, occurring generally within the final weeks, days or hours of death. However, it is probable that many end-of-life experiences are not reported, because the dying person is afraid of appearing confused or distressed and believes they will be given medication to stop them happening.

Carers may keep quiet about these end-of-life experiences because they believe it is not professional to talk about such things. Or they simply do not have the time to sit with the dying and therefore miss them. Relatives may not speak about such experiences to staff or to other family members and friends for fear of ridicule or disbelief. Nevertheless, research suggests that end-of-life visions and dreams hold profound meaning for the dying and help them to accept their dying process.

For anyone looking for support in how to talk to children about death and dying, I hope the Granny Mo series will be of help

43 thoughts on “How do you know when someone is beginning their dying process?”