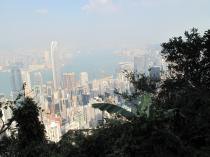 I have just returned for a week in Hong Kong, which included a weekend in Guangzhou – third largest, and one of the fastest growing cities in China.

It’s hard to explain what it’s like to visit mega-metropolises such as these to people who have never been.  Let’s say that in comparison, London is more like a sprawling township.

This is my second visit to Hong Kong – my first being four years ago. Within this short timeframe it felt to me that Hong Kong had quadrupled in population, pollution and most of all, noise.

Amidst thronging streets festooned with brightly decorated banners and neon signs, the sound of drilling, hammering and pounding explodes from a multitude of building sites, adding to the chaotic honking from cars and lorries, taxis, trams and buses – all vying to gain that extra inch in traffic jams so thick it is a miracle anyone gets anywhere.

Then there’s the shopping. I’m no slouch when it comes to shopping. But this was an experience so overwhelming I found it not just exhausting, but distressing.  From clothes, handbags and computers to food, animals and flowers, no matter what a shop or stall was selling it was packed with goods.  Logic says there must be a market for it, but it made me question who was buying it in this kind of quantity?  More important, what will happen to it all when no-one actually wants it?

I also began to notice the difference between those that have in Hong Kong, and those who clearly do not.  While shop facades in downtown Hong Kong may bear the signs of Jack Wills, Marks and Spencers,  Gucchi and other Western fashion icons, around the back is another matter.

I took this photograph of a tiny, dirty side street, where the less fortunate obviously sleep in the bunkbeds without overhead shelter.

Yet I was very taken with the way they cared for their shrine. It gave me hope that some kind of spirituality was respected within this human madness. Having said that, I also realised it was their symbol of hope that their circumstances would change. One day, they too will be able to own an i-pad and buy vastly expensive chattels in the array of over-the-top glitzy shopping malls that are the pride of Hong Kong. 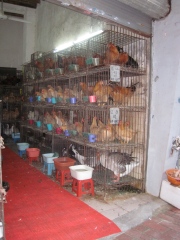 But the most distressing for me was the blatant lack of care towards animals.

I challenge any carnivore to visit the food market in Guangzhou are not be affected.

Guangzhou (once named Canton), a two hour train journey away, is a young modern city compared to Hong Kong. But its development over the past twenty years has been frantic and phenomenal. The city skyline is littered with bright yellow Meccano cranes towered over half built sites set to create yet more breathtaking sky-scrapers. 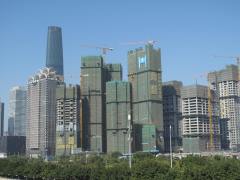 Every inch of available land is commandeered as this building boom careers along at break-neck speed. The upside is employment. The downside is horrendous air pollution and devastation of water supplies, and, of course, the destruction of the old way of life. 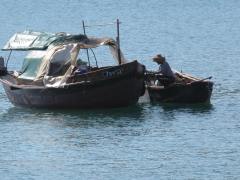 I yearned to see old China. There were signs that it still just about exists, but I was very sad to see that such a wonderful ancient culture is all but gone. Even the pagoda on the opposite bank of the Pearl River to the awesome 612 metre high Telecom

Tower in Guangzhou feels Disneyised. It could easily have come out of a box, ready made.

I came home disturbed by what I had seen. I will certainly never forget the experience of standing for a moment in the middle of hordes of people who had one thing on their mind:  making money. It made me feel lonely and displaced.

Yet, I can also see how Hong Kong is a beacon to those who want this kind of life.  And you have to take your hat off to Chinese ingenuity.  But I believe it comes at a great price to us all. 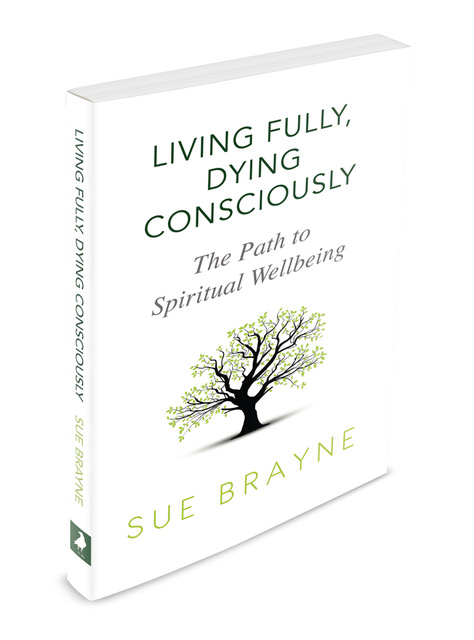