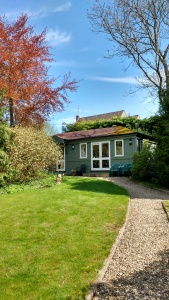 Seven of us gathered together in Jane Saunderson’s lovely wooden lodge, located at the rear of her equally delightful autumnal garden in Stratton, Cirencester. It was the perfect place to nestle down with a cup of tea and a piece of carrot cake to talk about things that really matter.

I know I have said this before, but I am always amazed by the willingness of those who come to these pop-up death cafes to throw aside reserve, and open up so quickly and with such honesty. We are, after all, mainly strangers when we meet.

It’s also interesting that the café often starts with conversations about practicalities such as making an Advanced Care Plan, which outlines what kind of care you want to receive at the end of your life, and whether you choose to have life extending treatment or not.

Several of us spoke about the issue of choosing someone to act as a Lasting Power of Attorney. We were concerned about the accountability this places on them, especially if put into the position of carrying out our end-of-life care wishes should we be incapable of expressing them ourselves.

One of the participants worked in the legal area, and said that there is a requirement to officially register your Lasting Power of Attorney for it become legally binding. Several of us had not realised this (I thought stating who I had nominated in my Advance Care Plan and giving it to my GP was enough), but another participant said that they had recently paid £200 to register their Lasting Power of Attorney with the Government’s Office of the Public Guardian. The participant also said that there were other sites providing this service, but may charge fees above those of the Government’s, so it’s important to thoroughly check costs before proceeding.

This initial practically-based conversation tends to help participants to settle into together, and often acts as the doorway to much deeper conversations. In this café, it led into a discussion about the way we would like to die.

We spoke about the relatively new wave of independent Death Doulas who are now offering care and support to the dying and their relatives. Although we thought this was remarkable work, most of us said we would rather to be surrounded by family or close friends. But one participant said they wanted to die alone. They could imagine needing the space to let go in their own time without feeling held back by an emotionally charged atmosphere. This opened up a conversation about how many dying people often seem to wait to die until the often distraught and exhausted person or people sitting with them have gone out of the room. The dying person seems to need peace and quiet in order to finally go.

One participant spoke movingly about their experience of this when caring for their dying husband. Their daughter had been sitting at his bedside, desperately not wanting him to die. ‘She kept stroking his head, crying, and begging him not to go. Eventually, the nurse came into the room and told her, “That’s enough now, you need to stand back.”’ The participant said that her daughter was deeply hurt by what the nurse said, but ‘she curled up on the end of his bed instead, and we both went to sleep. I woke up a little later as my husband took his last breath. I know that by giving him this emotional space, we allowed him to finally leave.’

Another participant spoke about caring for her dying husband at home. They had been married for fifty years, and her husband did not want anyone else to look after him. ‘I didn’t mind that, but towards the end I was completely exhausted. All I wanted was for someone to come and sit with him so I could grab a few hours sleep. It was over Easter weekend, and there were only two nurses on duty for the whole of the area. Eventually, a nurse did turn up. I asked the nurse to wake me immediately if his breathing changed, and I went upstairs to bed. A few hours later, the nurse woke me and told me that he was going. I dashed downstairs just in time to hold him in my arms and kiss him farewell. The nurse then told me that his breathing had changed some twenty minutes beforehand. I was so angry with her. I felt I had been robbed of those last precious twenty minutes with him.’

However, the participant also recognised that, by taking time away from her husband, it may have enabled him to let go. ‘He didn’t want to leave, me,’ she said. ‘That was the problem.’

The conversation moved onto talking about the extraordinary experience of sitting beside a dying person. ‘It is remarkable to witness the end of someone’s life,’ said one participant. ‘Their story, with all its complexities and dramas, is suddenly over and that’s it. It’s very sobering.’ Another participant, who had sat with their dying mother for many days, said, ‘I felt as if I was living in a kind of bubble. I couldn’t relate to the world out there at all. It felt as if the veil had become very thin, and I could almost step through it.’

All of us felt that something profound seems change when a person starts to die. One participant said, ‘I believe that there is a kind of preparation time that the dying are going through. It’s as if they have one foot still in this world, and one foot somewhere else, and they travel between these two realities. They only go when they are ready.’

‘I agree with that,’ said another participant. ‘Although my father was virtually unconscious, it felt as he was going through a profound inner learning. As if he was listening to someone or something deep inside. It took him eight days to die after having a massive stroke, but he seemed to need that time. The atmosphere in his room was very strange – not scary, but certainly not “normal.”’

‘I had a similar experience when caring for my dying parent,’ said another participant. ‘Perhaps, as they were being prepared to go over, I, as her carer, was also being prepared for them to leave me.‘

The conversation changed to talking about the sacredness of these final moments, and the use of rituals or rites as a way of saying goodbye. One participant spoke about feeling compelled to call in a priest to give her spouse the last rites. ‘He told me he didn’t want to see a priest, because he knew what it meant. But when he fell unconscious I did call in the priest who administered the Last Rites. Being a churchgoer, I knew my husband would have wanted it, and it certainly made a difference to me.’

Another participant also felt compelled to call in the priest to her father’s bedside. He, too, was completely unconscious by that time. ‘I knew he would have wanted to have been blessed by a priest. I just had to do it for him.’

‘I certainly would want some kind of blessing when I am dying,’ said one participant. ‘I was brought up Church of England, but even though I am not religious now, I would want the Last Rites. It would be like a completion for me. A going home.’

Several others who were lapsed Christians agree with the participant. This was a surprise to them. ‘I haven’t thought about this before,’ said one participant. ‘But yes, I think I would like to be anointed by sacred oil, and for someone ‘official’ to bless my life as it came to the end.’

‘I definitely want a final rite,’ said another participant. ‘I don’t want a religious one, but for someone to bless me out of my life, most certainly. I can imagine it giving me great comfort.’

Our café reluctantly drew to a close. Only two hours previously we had been seven virtual strangers, but as we said our farewells we gave each other great big hugs, everyone soul-warmed by the honesty and integrity of the group, and, of course, by the carrot cake and tea that warmed our bellies.

The next pop-up death cafe in Jane’s lodge, Cirencester, will be on Saturday, March 18th, from 2.30 – 4.30. If you want to book a place (early booking is advisable as these cafes tend to fill up quickly) please contact me.