Okay, so the bus stop in the middle of a Delhi slum wasn’t exactly London’s Victoria Coach station, and the road certainly wasn’t a motorway, but this was a journey I’m glad I didn’t miss.

It started for me (I was travelling with four other IVHQ volunteers) with two delicious potato cakes from a food stall holder for the massive sum of four rupees (around five pence).

Lulled into a false sense of camaraderie with the locals, I handed my suitcase to a lean, just post-pubescent youth with a wispy beard and moustache who was loading luggage underneath the air-conditioned bus to Dharamsala.

He took my case, threw it in, and demanded twenty rupees for the trouble. When I challenged him – there was no mention of having to pay for luggage when the tickets were purchased – he hauled my case out again.

‘Can you please put this back,’ I said.  ‘No,’ he replied, his eyes flashing. I knew I was in trouble (you learn fast in India).

Luckily our taxi driver stepped in and bargained Whispy-Beard down to ten rupees.  My case was reinstated and I climbed abroad the bus feeling more than a little miffed, but keen not to upset this little upstart any further.  The driver cheered me up, with displays of much back-slapping and hand-shaking with his colleagues.

We set off more or less on time, at half past six in the evening, and shortly stopped at a second pick-up point.  An American couple in their mid-twenties joined us.  They were coping admirably with a cock-up with their tickets. The bus they had meant to take had already left.

Our bus set off again, but a few minutes later we were back at the original bus stop. Hmmm. We picked up more people.  Once more we set off, this time getting a little further afield, but, Hey Presto! In no time, we were again back were we started.

Why? I have no idea, nor, it seemed did anyone else on the bus, even the most hardened of our fellow Indian travellers.

After several minutes of uncertainty all round, a blue-shirted official struggling to maintain control over his bulbous stomach waved us off with a flick of his wrist, and we finally jolted forth for Dharamasala on our epic eleven-hour overnight  journey.

Within an hour we had pulled into a rest stop.

‘Twenty minutes,’ warned the young man in a green t-shirt who had thoroughly checked our tickets.

Within fifteen minutes, all we Europeans were back on the bus as commanded. The Indians, including Mr Driver-Who-Everyone-Liked and his colleague, Green-T-Shirt-Who-Duz-The-Tickets, clearly had a different understanding of time. After forty-five minutes, they finally reappeared, and off we went again. I settled back, wrapped in the blanket provided, with my blow-up pillow secured around my neck.  Ah! Time for a good sleep.

Not a bit of it. Road surfaces in India are appalling at best and catastrophic at worst.  This was going to one almighty bone-shaker.

As we drove on, we passed numerous vehicles parked (sometimes, double parked) at the side of the road, with passengers stretched out under blankets on the ground alongside them, evidently trying to get some sleep just yards from trucks and night buses thundering by. I wonder whether India has laws that stop some bus and coaches from proceeding after nightfall.

Apart from my bones being jogged and jarred to the marrow, all continued well until we pulled into a petrol station.  By now it was heading for 2.00am.  I couldn’t find my sandals, which had shot off on their own expedition under the seats, so I had to go to the loo barefoot.  An interesting experience.

So, we all got on board again and nestled down. The bus engine roared into life and we were away.  Two seconds later, the bus screeched to a halt.  Mr Driver-Who-Everyone-Liked tore off the bus, with Green-T-Shirt-Who-Duz-The-Tickets in hot pursuit.  For some unknown reason, Mr Driver proceeded to have a massive run-in with a maroon-turbaned lorry driver who had drawn in beside the petrol pumps.

Mr-by-now-Very-Cross-Lorry-Driver pulled out his mobile phone, but I don’t think it was his mother he was calling. His action sent Mr Driver-Who-Everyone-Liked into an apoplectic fit.  Much finger jabbing and verbal abuse on both sides.

In stepped a lanky garage security guard with loaded rifle slung over his shoulder, supported by a gaggle of fretting petrol attendants. Finally Mr Driver-Who-Everyone-Liked turned his heel on maroon-turbaned lorry driver, stalked back to the bus and off we went.

Only to draw up two minutes later outside a Sheikh shrine.

Green-T-Shirt leapt off the bus, threw aside his shoes, donned a scarf from a bin, and proceeded to pray at the shrine.  He completed what he needed to do and headed for the bus.  But Mr Driver-Who-Everyone-Liked was also off the bus, making a mobile call aided by several Sheikh priests clad in white.

One was much more important than the rest. He had a gold dagger attached to his rope waist band and marched importantly up and down holding a long golden stave as if on a military parade ground.

I have no idea who Mr Driver was calling, or why (I can only assume it was connected to Mr-Very-Cross-Lorry-Driver).  I just wished he’d get back on the f***ng bus and f***ing well DRIVE. It was by now nearly quarter to three in the morning.

Eventually, both he and Green-T-Shirt returned to the bus and wheels rolled.  Two minutes later we were stationary outside The Moon Hotel, a concrete dome and glass affair which promised air-conditioned rooms and the place to hold weddings.

Green-T-Shirt and Mr Driver got off the bus and opened one of the luggage compartments. I swear Mr Driver climbed inside, but I can’t be sure because I couldn’t really see what is going on. He must have got out again because the bus moved off, and we were now doing a mighty speed. Potholes, be damned. 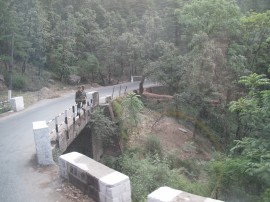 at alarming angles, sending water bottles careering off luggage racks and rolling around the floor for the rest of the journey.

By this time, my body and soul were desperate for sleep, but my alarm system was blowing a force twelve flight-fight-freeze gale.

As dawn approached and we neared Dharamsala,  we were met by what seemed to be the entire Indian army out on an early morning run.  We passed the town’s Christian burial site, home to the bones of so many colonial men, women and children, and then a scrub fire which would have had the whole of the Gloucestershire (where I come from) fire brigade racing to put it out. But this is India, so we hurtled past without a care.

After several more hair-raising bends, we drew into our destination, safe if not sound, stumbling from the bus dazed and falling relieved at the feet of Dawa, our wonderful project coordinator.

He scooped us up and led the way to our home stays.  But our adventures for the day were not over. Dawa told us that the Dalai Lama, whose base in exile from Tibet is of course right here in Dharamsala, had just returned from a triumphant trip to England where he had been awarded the very prestigious John Templeton prize.

We parked our bags and raced to a corner on the road where His Holiness was to drive past.  Battling terminal exhaustion, we joined a host of flag-waving Buddhists, Hindus, Christians, Muslims and atheists eager for a glimpse of this extraordinary man.

At last, after two long and increasingly hot hours, a blast of police sirens and we all surged forward only to be pushed back again by the Dalai Lama’s security men.

I had my camera primed and caught a shot of the lead car. But I completely missed the second car, which had the Dalai Lama, grinning from ear to ear – as he does – seated in the front  passenger seat and giving his traditional prayer greeting.

But I didn’t care. It was one of those unexpected precious moments in life.

And, that’s what travelling is all about.

2 thoughts on “A gruelling bus journey soothed by the Dalai Lama, himself!”